Hell Is A City (Savile, Brady, Shipman, Hindley, the hangman…) 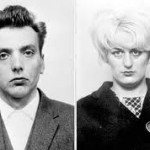 Manchester; it can be a nasty place. Terrorism, riot, revolt, hangings and murder.

Even the most conspicuous places are fraught with danger.

Take for instance Old Trafford. What could be safer than a football match with 60,000 joyous fans hoping for European glory?

Not for Edward Evans on the 6th of October 1965. He felt alone in the huge crowd, his mate having failed to turn up, so he left at half time and went for a drink on his own in town.

He got chatting to a friendly Scottish bloke, and when he was ready to go home he made for Central Station (now Manchester Central exhibition centre) to go home. By the station milk vending machine there was a tap on his shoulder. It was that Scottish guy again. “Fancy a drink at mine, mate? Me sister’s in the car outside.” Sounds perfectly innocent, except that the Scottish fellow was Ian Brady and the “sister” was Myra Hindley.

Alternatively you might end up in jail where there’s always the possibility of getting captured by a fellow prisoner and taken for a (hopefully) mock execution on the roof of Strangeways… or run into an IRA cell disguised as the organisers of an annual dinner and dance at the Free Trade Hall.