“One can scarcely walk about Manchester without coming across frequent examples of the grand in architecture. There is nothing to equal it since the building of Venice.”

That was what The Builder magazine had to say about Manchester architecture in the 1860s. What they didn’t say was that the design of so many of the city’s great buildings was stolen from other cities.

Why? Jobbing architects had little time or energy to create a new look, so in the 19th century the architects that gave the growing city its first face filched from the scrapbooks they had filled on their Grand Tour. In those days they went to the Mediterranean countries, where they would sketch a ruin in the sands of Syria, a derelict temple in Asia Minor, a palazzo in Florence.

Consequently the Free Trade Hall more than resembles the Gran Guardia Vecchia in Verona, the Memorial Hall by Albert Square owes its formidable facade to the vainglories of Venice, and the Britannia Hotel is a blatant and beautiful steal from the Fondaco dei Turchi (below), also in Venice.

Even the dear old Midland Hotel of 1903 is not original. Below is the Grand Hotel of St Andrews, built in 1895 by Thomas Hamilton, which featured early on in Chariots of Fire.

In the 20th century the would-be Waterhouses and Worthingtons went westwards – to the New World, to gaze in awe at the skyscrapers of Chicago and the glass and granite giants of Gotham. This gave us Sunlight House, Lee House and City Tower.

In the 21st century one needn’t venture far from the computer. And from that we get the Beetham Tower, based on a French fancy that was never actually built.

Here’s who did it here and did it before there, with the route we take.

On this illustrated talk at the stunning Gorton Monastery, itself a masterpiece of Gothic revival architecture, Ed Glinert explains why Manchester looks like it does. 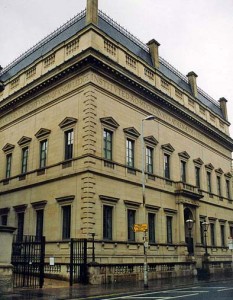