The History of Manchester in 20 Objects

Ed Glinert will be trawling the streets of Manchester locating the symbols and signs that reveal the history of Manchester in surprising ways.

An off-beat, sideways, soidisant look at Manchester history through 20 objects, some familiar, some little-seen and barely-noticed (statues, plaques, cartouches, shields etc) in the city centre…from the much-hated “Berlin Wall” in Piccadilly Gardens to the misunderstood “IRA” pillar box on Corporation Street, via the sacred geometry of the Cenotaph, the strange ball on top of the Town Hall spire, the lifesize statue of one of the oddest figures in Manchester history and much more.

And a review from a very satisfied customer.
“Dear Ed. Thank you for a most interesting tour of’ ‘Manchester in 20 Objects’ last Tuesday. It was such a shame that more people did not turn up but those who joined us thoroughly enjoyed it! I was amazed at the familiar and unfamiliar objects that you chose to talk about and I shall now go around our city looking for some objects of my own! Thank you for all your efforts”.

And here’s some info on the ubiquitous bee. 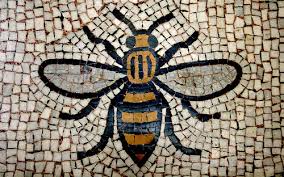 Why the buzz in Manchester? In the aftermath of the May 2017 tragedy the bee began to appear throughout the city as a solidarity symbol and a tattoo choice.

The bee – the worker bee – is already evident throughout Manchester on municipal structures. In the Town Hall the platform outside the Great Hall is called The Bees and is decorated appropriately. The city’s coat of arms features a globe coated with bees; worker bees. At Manchester Art Gallery the most famous and admired painting is Work by Ford Madox Brown.

This tour will examine the city’s apian history and explore other symbols that relate Manchester history,