The Suffragettes (private tour for the W. I.)

In August 1819 at least a dozen people were killed demonstrating for the right to vote at St Peter’s Fields, Manchester. Nearly a hundred years later, in 1903, the Pankhurst family, disgusted with the Independent Labour Party’s refusal to allow women to use the newly-opened Pankhurst Hall in north Manchester, founded the Women’s Social and Political Union to campaign for the right of women to have the vote in parliamentary elections. 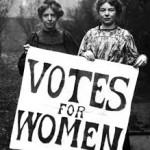 What had been a sedate pressure group, willing to stay within the law to change the law, soon became hostile and aggressive. The suffragettes disrupted a Liberal Party rally in the Free Trade Hall in 1905 and two of their leaders – Christabel Pankhurst and Annie Kenney – were jailed. Manchester had become Suffragette City, but it took a generation and many thousands of broken windows for women to secure the vote.